While rosemary essential oil is very popular among hair loss sufferers, the actual result doesn't seem to meet people's expectations. In this article, we talk about a possible missing link for the discouraging result and what you can actually do to make it more effective for stimulating hair growth using rosemary.

Rosemary oil is perhaps the most well-known (and very popular) essential oil for hair growth along with saw palmetto.

Whether you Google’d it or saw it mentioned in various hair loss forums, many seem to be in agreement with the fact that rosemary essential oil equals reversing hair loss and regrowing hair.

But is it true? Does rosemary oil actually regrow hair? Or Is it just another useless natural remedy that doesn’t work?

In this article, we will get to the bottom of this.

After reading this article, you will get the ULTIMATE answer about using rosemary oil for hair growth. Here, we help you understand if it’s actually a good idea or not.

In the beginning of this article, we will share with you all of the available research studies done on rosemary essential oil for the sole purpose of regrowing hair (Don’t worry… there are only 3).

Next, you will see what actual users have to say about using rosemary oil topically for hair loss and what their before & after results are like.

After that, we will share a very important piece of information on rosemary oil that people seem to overlook.

And finally, at the end of the article you will find out how to use rosemary for hair regrowth (an effective rosemary hair growth recipe) to try out at home.

There are a total of 3 direct studies on rosemary oil for hair loss.

Two studies used rosemary only to gauge hair growth effects and the other study used a mixture of essential oils which included rosemary oil for the purpose of hair regrowth.

Here is the detail of each study and its result:

This 2015 Iranian study (1) was evaluated with human testing (= increased credibility).

In order to investigate the effectiveness of rosemary oil for the treatment of androgenetic alopecia (the most common type of hair loss for both men and women), researchers randomly divided 100 hair loss suffering participants into two groups:

The participants were instructed to apply 1 ml of the assigned solution twice daily (a total of 2ml per day).

What do you think?

To be honest, I don’t think this will make people too excited about trying out rosemary oil to combat hair loss.

Yes, the after photo has more hair (if you look closely), but the difference is… subtle.

If you expected dramatic results of using rosemary oil for increased hair density, this is simply a discouraging reality to face.

Looking at the graph, both rosemary oil and 2% minoxidil increased the number of hair follicles; however, this is NOT a dramatic change.

Now, let’s look at the before and after photos of one participant from the minoxidil group:

The after photo shows new hair growth on the previously bald M spot. It’s visible, yet nowhere close to full growth even after 6 months of consistent daily use.

The researchers mention that both groups “experienced a significant increase in hair count at month 6” (although it doesn’t look that significant for visual inspection).

They also note that both groups experienced scalp itching (consider it as minor rosemary oil for hair loss side effects) during the 6-month experiment, which was more prominent in the minoxidil group than the rosemary group.

Both rosemary oil and minoxidil regrow hair, but in a subtle manner.

Also, even for that subtle change to happen, you will need to be consistent not just for 3 months, but more like 6 months.

Unlike the previous study, this 2013 rosemary for hair loss study (2) was done on mice and with cultured cells.

While a human experiment is always a more accurate way to evaluate results when it comes to studies like this, mice-based research can still give you an idea how a certain substance may affect the human body.

Here, the researchers wanted to find out if rosemary contains an anti-androgen property, which can be used as a sign of reversing DHT hair loss. 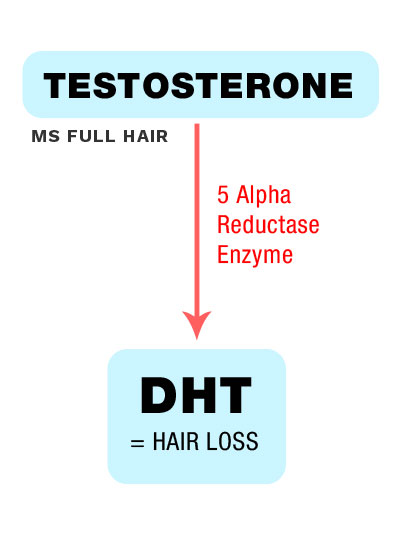 To make a long story short, they first applied testosterone to mice, which in turn interrupted hair regrowth. Then, the researchers treated the mice with rosemary extract to see if it would provide a hair regrowth stimulation effect.

The topical rosemary treatment indeed improved the rate of hair regrowth in those mice.

The test result again confirmed that rosemary extract does contain an anti-androgen property, as it effectively blocked 5a reductase enzyme in a dose-dependent manner.

This study shows that rosemary may prevent pattern hair loss by inhibiting 5a reductase enzyme activity, thus stopping testosterone from being converted to DHT hormones.

This is another well-known study (3) that popularized the use of essential oils for hair regrowth, thanks to its amazing before and after transformation.

86 participants with alopecia areata (patchy bald hair loss) were involved in the study. They were randomly divided into two groups.

Look at this photo:

The transformation is simply amazing!

The researchers note that 44% of group 1 (mix of essential oils + carrier oils) showed improvement, while only 9% for group 2 (carrier oils only).

However, there is one drawback of this study:

As 4 essential oils were used in the experiment, you can’t really tell if it was actually the rosemary oil that promoted that significant hair growth or if it’s due to one of the other essential oils (or even perhaps the combination of all).

Rosemary oil, when used with other essential oils, appears to contain a synergistic hair regrowth property, especially effective to those who have non-scarring hair loss.

The summary of rosemary oil for hair loss studies

The above 3 studies reveal some interesting facts:

The result of the first study (human participants) is likely to be the most accurate depiction of how the result will go if you use rosemary oil for hair loss. In other words, if you decide to use rosemary oil alone to combat hair loss, don’t expect a miraculous result.

The last study can be very useful for people with alopecia areata (or any other non-scarring hair loss types such as alopecia totalis or universalis); however, it’s unclear if it was the rosemary oil that stimulated hair growth due to the number of essential oils being used simultaneously in the experiment.

Unfortunately, there doesn’t seem to be many people who use rosemary essential oil as a mono hair loss treatment to treat thinning hair and thickening hair.

Most of the people I came across usually mix multiple essential oils together as a topical treatment.

But, I came across one guy who is the closest positive representation of using rosemary oil to regrow hair.

In his case, he used rosemary oil as the main portion in his DIY mix, and added several drops of other essential oils (sage and lavender) as well.

He consistently used the mixture for a year and kept a progress log as well (which is great).

Let’s look at his photos: 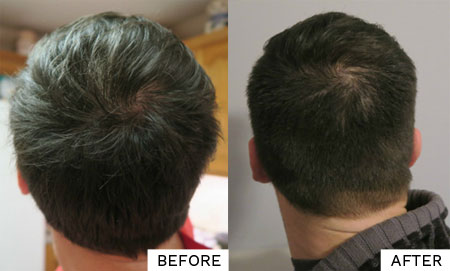 Can you tell the difference?

To me, it looks the same. Even if there was more growth in the after photo, the change seems minimal.

So, are you saying not to use rosemary oil for hair growth?

Don’t get discouraged just yet.

If you are looking at the results from human-based rosemary study and the above guy’s one year experiment, rosemary oil doesn’t seem to be THE answer for significant hair growth.

In other words, rosemary essential oil is probably not THE best oil for hair loss and regrowth.

However, we found there is something people seem to overlook.

There’s a BIG difference between rosemary oil vs rosemary extract

Reading study after study about rosemary, we found something VERY interesting.

Google rosemary benefits – you will see the following properties from numerous studies:

These effects are indeed important for our overall health, but also crucial for hair growth.

Interestingly, researchers explain that it’s the phenolic compounds (such as carnosic acid, rosmarinic acid, carnosol) that provide such beneficial properties.

So which one includes more of these phenolic compounds? Rosemary oil or rosemary extract?

Let’s look at the composition chart of both (4):

Note: depending on the rosemary species, geographical location, the type of solvents, and extraction methods, the composition of rosemary oil and extraction can somewhat vary. But the above seems to be the main constituents found in general.

As you can see, rosemary extract that contains phenolic compounds as the main constituents, rather than rosemary essential oil.

What about antioxidant effects?

Now, the most important question: Which one includes the DHT blocking (anti androgen) property mentioned in the above study case?

If you take a close look at the 2nd study (the one that evaluated rosemary as a possible natural DHT blocker), the researchers discovered that 12-methoxycarnosic acid, a type of carnosic acid from rosemary extract (not oil), is THE active compound that regulates 5 alpha reductase inhibition (enzyme that transforms testosterone to DHT).

Does this mean rosemary oil doesn’t have any beneficial properties to hair loss?

It’s just that researchers seem to agree on the fact that all of the anti-inflammatory, antioxidant (and certain anti-fungal/bacterial) properties are often from phenolic compound constituents (such as rosmarinic acid and carnosic acid), which are abundantly found in rosemary extract, rather than rosemary oil.

Finally, the fact that the DHT blocking compound was discovered from the rosemary extract gives a strong reason to try out the extract for the purpose of preventing hair loss.

So the most important question:

How do you make a powerful rosemary extract for hair growth, preferably at home?

Here is the recipe:

So far, we have established that rosemary essential oil does work for hair regrowth, but with minimal results.

We also mentioned that rosemary extract is abundant in phenolic compounds, which contain anti-inflammatory and antioxidant properties people usually talk about.

Finally, specific research on rosemary for hair growth found a compound that inhibits 5a reductase enzyme (DHT blocker) from rosemary extract as well.

So, here we will show you a simple way to make rosemary extract for hair growth.

First, here is our recommended rosemary leaves for the recipe:

Starwest Botanicals offers a great range of quality herbs and these rosemary leaves are no exception. It's USDA certified and comes in a 1 pound bag for under $20. Great value for the money!
BUY

Once the mixture is ready, put it into a small bottle and start using it twice a day (in the morning and before you go to bed).

For the remaining liquid, make sure to keep it sealed and refrigerated.

Here is a useful link explaining how to maintain 60C when boiling water or you can simply use a thermometer.

Unfortunately, the rosemary oil for hair growth hype doesn’t seem to live up to expectations, at least based on the research studies and the actual user’s one year experiment.

However, digging deeper, we found that the rosemary extract may work a lot better than rosemary essential oil due to the abundance of phenolic acids that provide various hair growth benefits as well as overall health benefits.

Finally, the DHT blocking compound found by one study turned out be from the rosemary extract as well.

Try the suggested rosemary for hair recipe above. What you will also love about the recipe is that unlike the oil mixture, it doesn’t leave your scalp greasy nor make a mess on your pillow!

Have you tried either rosemary oil or extract for regrowing hair? Share your experience below!