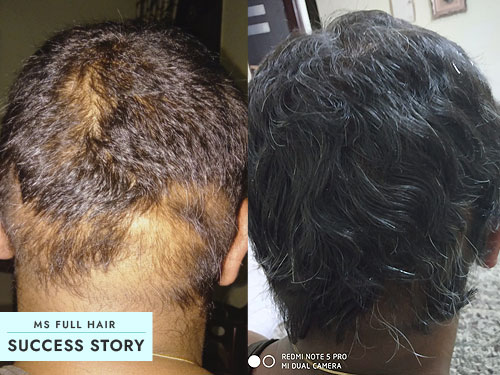 If you are looking for a natural way to cure alopecia areata, this success story is a must-read.

There are several posts on his alopecia areata recovery journey. I carefully read them all.

Here, I will give you a summary and actionable tips you can take in order to reverse hair loss. 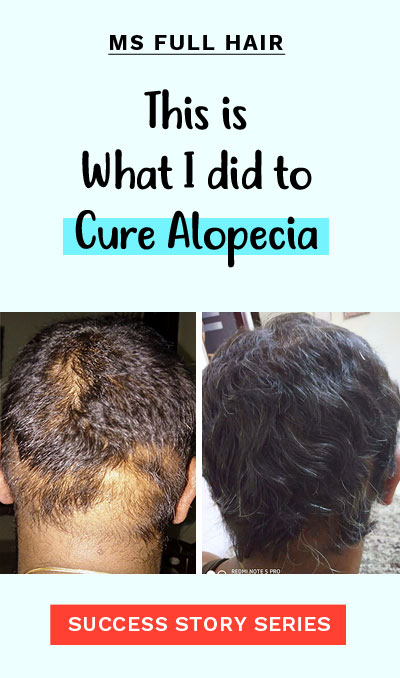 He is one of many people who suffer from alopecia areata.

For him, it happened 3 years ago.

Since then, he says the symptoms slowly got worse and what previously was only 2 patches increased to 15 patches all over his body, including his chest and beard.

He believes it all started due to emotional stress.

As his alopecia symptoms were getting worse day by day, he decided to go see a doctor and get much needed help.

Visiting doctor after doctor, but no luck

He said he visited 6 different doctors and some of them were well-regarded dermatologists for hair loss.

Doctor #1: His first doctor prescribed him with steroid injections and minoxidil. Unfortunately, this didn’t do anything and the number of bald patches continued to increase. He said the doctor had no answer of why it was the case.

Doctor #2: His second doctor also gave him similar prescriptions, but his alopecia areata condition was still getting worse.

Doctor #3: So for his 3rd doctor’s visit, he decided to go to a very famous dermatologist with great reviews. The doctor suggested 6 steroid injections every two weeks.

Luckily, he said this continuous treatment gave him ALL OF HIS HAIR BACK. BUT, a couple of months later, not only did newly grown hair fall, but he ended up with more patches totaling 10+.

Doctor #4: He then went to his 4th doctor. This time, the doctor informed him that every dermatologist he goes to, he will likely get the same treatments for alopecia areata (which is usually steroids and minoxidil as a starting point).

His search for doctors who can cure alopecia areata continued.

Doctor #5: His 5th doctor, who specialized in ayurvedic medicinal practice was actually was the worst and was only focused on money. Even though he tried the doctor’s prescribed medications for four months, there was no hair growth whatsoever.

As you can see, he went to see 6 different doctors, but none were able to give him new hair growth (except for the 3rd doctor who gave him steroids injections, but relapsed in the end, so it doesn’t count).

Light at the end of the tunnel

Luckily, he met a homeopathy doctor that was referred by his niece. His niece told him that this doctor actually cured many people suffering from alopecia.

He said he has been working with this doctor for 4 months now and his conditions have dramatically improved for the better.

Here are the before and after photos of his alopecia areata recovery:

While he says he still has several bare patches, all of the other patches have filled with new hair growth.

The following section includes his tips on how he cured (ongoing) alopecia areata.

How he cured alopecia areata

His last doctor (7th doctor), which he gives a full credit to, gave him a lot of valuable information.

First, he says that the homeopathic doctor took a customized approach.

By taking a close note on his hair loss symptoms as well as his mental and physical states, the doctor gave him medicines and changed and tweaked them around until they found THE one, which he feels is actually working for his hair loss.

He doesn’t say what the medicine is. I am assuming it’s something homeopathic, rather than actual medications.

But, he says that some of the various medicines he tried in the past but didn’t do much include Sulphur, Natrum Sulph, Sac Lac, and many others.

Also based on his post, that medicine appeared to be customized for his specific body type and matched ongoing physical symptoms he was having. So even if he mentioned what that medicine was here, there’s a chance that it’s not going to work for your specific body needs to address the main cause of your hair loss.

In addition to this though, he emphasizes that the medicine is only one part of hair regrowth equation.

Below is what he actually did on a daily basis and applies to everyone who is suffering from alopecia.

#2. Universal hair regrowth tips – Applies to everyone with alopecia areata

Leech oil? You may say. And I agree.

According to him, his friend recommended this for regrowth. While he was somewhat skeptical, he did his research about its properties and decided to try it.

Interestingly, he said he actually experienced some regrowth. But he also notes that applying such oil is only a temporary fix. In order to have permanent hair regrowth, one needs to fix it from inside, not just the outside.

Finally, he mentions that you should check your vitamin D level. Many people, especially in the United States are lacking enough vitamin D, which is closely related to unwanted hair loss.

Some of the other tips he wrote, but didn’t include here are things you are already family with: Get good sleep, drink plenty of water, do not use chemical products (such as hair dye) on your scalp, etc.

Let me quote what he says:

After being to 4 dermatologists and 2 homeopathy doctors and 1 Ayurveda doctor and spending more than 50000 rs… I understood one thing that you can get temporary relief by allopathy (he is referring to typically prescribed medical treatments for AA) since it’s all about inside body reaction.

He notes that while topical treatments can give him a fix, it’s only a temporary solution.

In order to REALY cure alopecia areata, your lifestyle needs to be changed, especially “the diet” part.

He is also against steroids injections as well as minoxidil or finasteride due to the same reason – temporary fix – and undesirable side effects.

Finally, he emphasizes that most people quit after 2-3 months.

Give it more time – continue for at least 6 months to 1 year.

His story was a pretty interesting read.

The fact that he went to see 6 different doctors shows how committed he was on reversing hair loss.

As I read more about alopecia, I agree with people on the point that alopecia is not just a bald patch or bald head issue, but it’s something that needs to be healed from inside the body.

This means that the proper diet is a CRUCIAL part of curing alopecia areata (or even totalis or universalis).

For some of the tips he gave out such as using leech oil, I am not sure what to think of it. But it seems like it’s a thing for regrowth for some hair loss communities in India.

But like he said, he also admits that such topical oil is only a temporary fix – which goes back to the original point: the importance of keeping the body healthy is THE priority for reversing alopecia.

Start applying some of the tips (or ALL) to your daily life and continue on for 6+ months.